Hard Water May Cause Eczema By Breaching Skin’s Protective Barrier 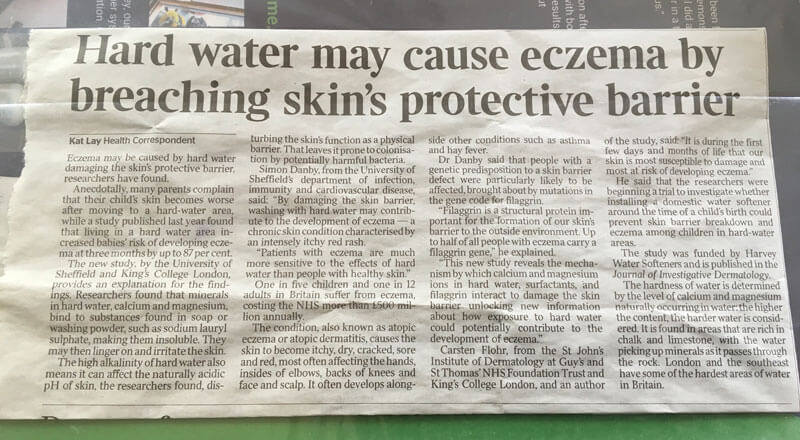 Eczema may be caused by hard water damaging the skin’s protective barrier, researchers have found.

Anecdotally, many parents complain that their child’s skin becomes worse after moving to a hard-water area, while a study published last year found that living in a hard water area increased babies’ risk of developing eczema at three months by up to 87 per cent.

The new study, by the University of Sheffield and King’s College London, provides an explanation for the findings. Researches found that minerals in hard water, calcium and magnesium, bind to substances found in soap or washing powder, such as sodium laurel sulphate, making them insoluble. They may then linger on and irritate the skin.

The high alkalinity of hard water also means it can affect the naturally acidic pH of skin, the researchers found, disturbing the skin’s function as a physical barrier. That leaves it prone to colonisation by potentially harmful bacteria.

Simon Danny, from the University of Sheffield’s department of infection, immunity and cardiovascular disease, said: “By damaging the skin barrier, washing with hard water may contribute to the development of eczema - a chronic skin condition characterised by an intensely itchy red rash.

“Patients with eczema are much more sensitive to the effects of hard water than people with healthy skin.”

One in five children and one in 12 adults in Britain suffer from eczema costing the NHS more than £500 million annually.

The condition, also known as atopic eczema or topic dermatitis, causes the skin to become itchy, dry, cracked, sore and red, most often affecting the hands, insides of the elbows, back of knees and face and scalp. It often develops alongside other conditions such as asthma and hay fever.

Dr Danny said that people with a genetic predisposition to a skin barrier defect were particularly likely to be affected, brought about by mutations in the gene code for filaggrin.

“Filaggrin is a structural protein important for the formation of our skin’s barrier to the outside environment. Up to half of all people with eczema carry a filaggrin gene,” he explained.

“This new study reveals the mechanism by which calcium and magnesium ions in hard water, surfactants, and filaggrin interact to damage the skin barrier knocking new information about how exposure to hard water could potentially contribute to the development of eczema.”

Carsten Flohr, from the St John’s Institute of Dermatology at Guy’s and St Thomas’ NHS Foundation Trust and King’s College London and an author of the study, said: “It is during the first few days and months of life that our skin is most susceptible to damage and most at risk of developing eczema.”

He said that the researches were beginning a trial to investigate whether installing a domestic water softener around the time of a child’s birth could prevent skin barrier breakdown and eczema amount children in hard-water areas.

The study was funded by Harvey Water Softeners and is published in the Journal of Investigative Dermatology.

The hardness of water is determined by the level of calcium and magnesium naturally occurring in water: the higher the content, the harder the water is considered. It is found in areas that are rich in chalk and limestone, with the water picking up minerals at it passes through the rock. London and the southeast have some of the hardest areas of water in Britain.